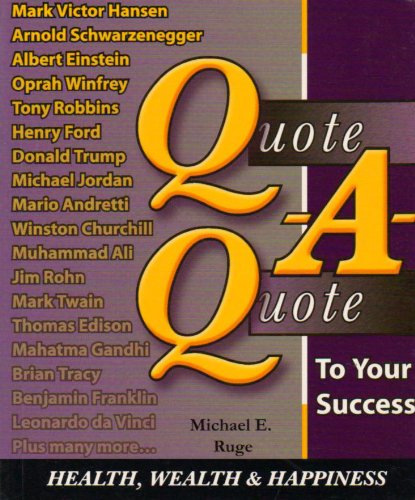 From the Inside Flap

What do actors and astronauts, healers and hell-raisers, poets and popes, martyrs and magicians, writers and rock stars have in common?

They’ve all been quoted throughout the ages… offering us sage advice and origninal insights. Catch the best of them in the pages of this book!
About the Author

Michael E Ruge is a successful entrepreneur, expert negotiator and dynamic community leader. As founder of several enterprises, his strong, interpersonal leadership style has positively influenced the bottom line of many companies. Michael facilitates the development and growth of junior corporations worldwide through his vision, support and mentor management. An inveterate traveler, Michael jaunts around the world to benefit various Charity causes. Michael owns and operates All Ways Solutions, working as an a Eco-Advisor and Business Consultant from his lakeside home on Vancouver Island, BC, Canada. Michael has been collecting quotes for several lifetimes (well, at least one!) and finally decided to share his collection with the world.

Ask About Gold by Michael Ruge

Hi, I am . I have helped several CEOs (retired and still active) most of whom own multi-million dollar companies. We know problem solving.
[more]